You can always spawn at:

You can choose a spawn location from the list on the upper left, or directly by clicking on a green circle on the main map.

Redeploy hop: when you want to spawn at a specific allied base, but it is too far from your position, you can keep redeploying to the closest base to your desired destination, until you get where you want, one base at a time. You can accelerate this process by pressing the redeploy key while on the loading screen.

There is always a chance that spawn point will automatically change in the last second, and you’ll end up god knows where. To avoid this issue, deploy by double clicking on the spawn location on the map itself. 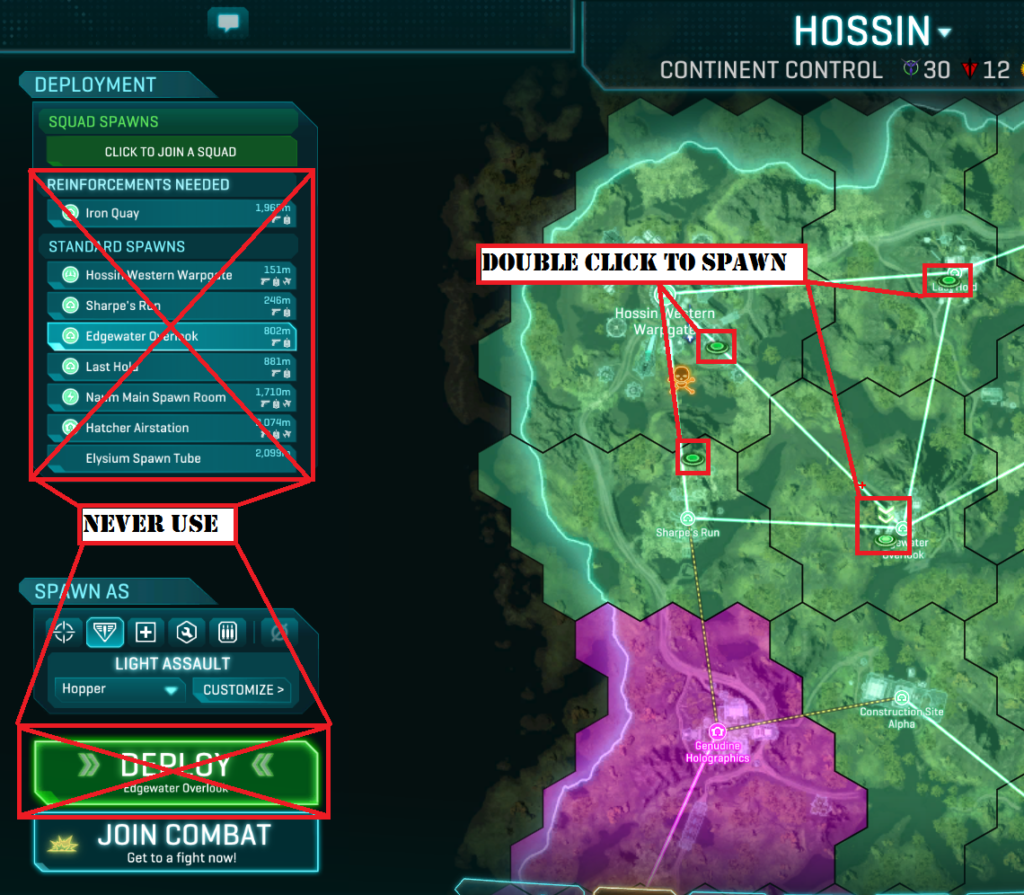 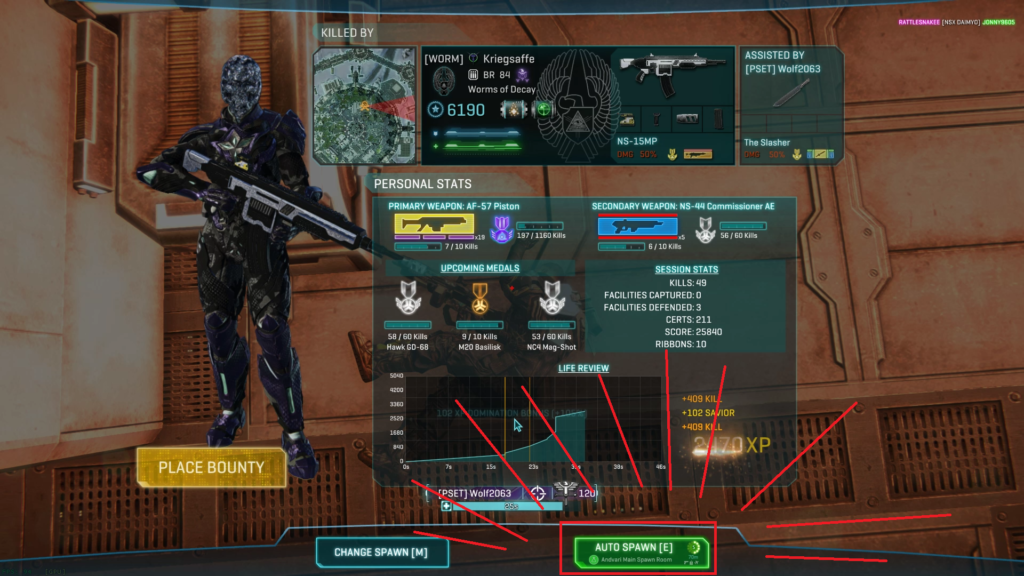 Quick Deploy is available from the Death Screen, and it gives you an option to quickly respawn on your last respawn point.

You cannot use Quick Deploy if there are more than 60% of allies in the current region. You can still manually select the same respawn point from the main map, though.

This restriction will not apply if there are fewer than 12 allies in the region. 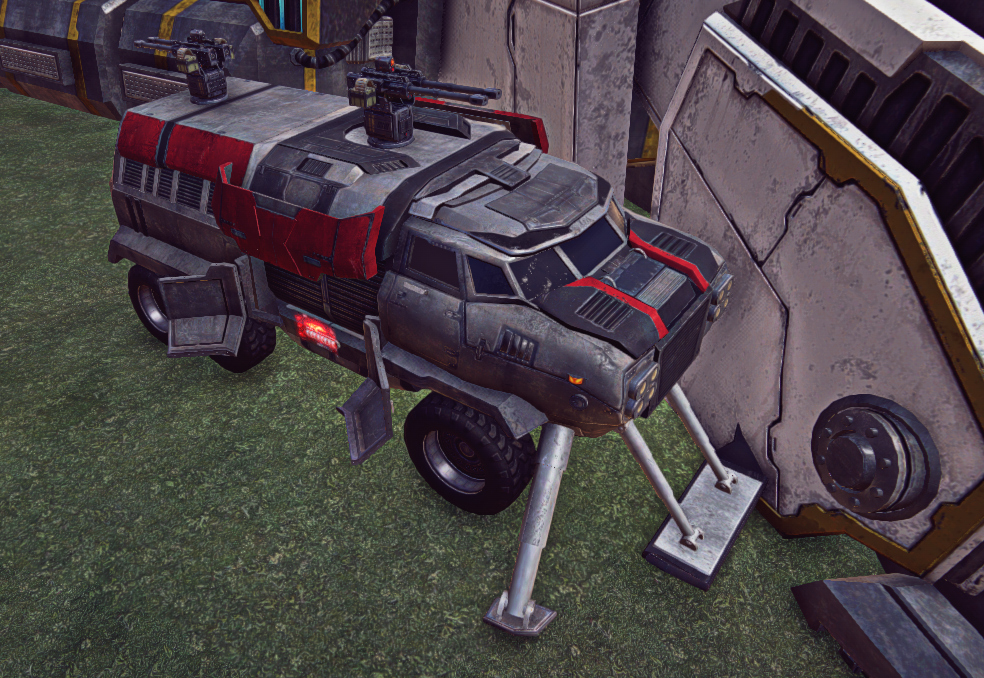 You can spawn at deployed Sunderers within 1000m. They will also provide access to an Infantry Terminal.

You can spawn on allied bases from any distance when they are under attack by superior enemy numbers, as long as the base is connected to your Warpgate via lattice link.

Supposedly, Reinforcements Needed can activate only when there is at least one ally in the base’s region.

Redeploying “kills” you without adding a death to your statistics. It is often done after a battle ends, so you can quickly get into combat elsewhere. 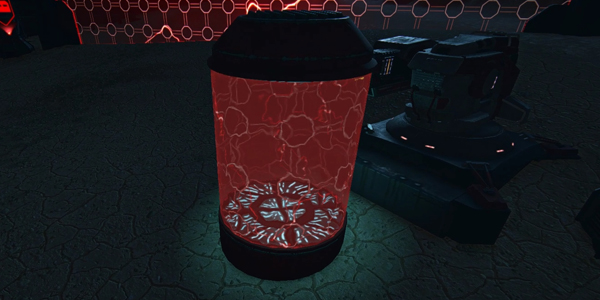 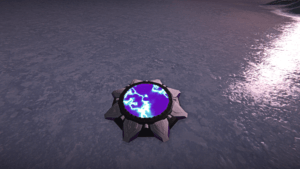 Routers are deployable spawn pads, which can be accessed from constructed Routing Spires.

Join Combat can take you to any fight, where your faction’s population is within 20% of the enemy population. It will use nearest available spawn point, including Sunderers and base spawns.

Join Combat takes 10 seconds to activate and has a 2 minute cooldown.

Join Combat is known to be buggy, and will sometimes try to take you to fights that are already over, or completely hopeless. You can avoid this if you use Join Combat from the main map. Then Join Combat will show you the base where it wants to take you, and then you can decide whether you want to be there.

Prepare for a hard fight if you go to a fight where enemies have more than 60% population.

If you play in a squad, you will have a few additional spawn options.

You can spawn directly into a Sunderer, Galaxy or a Valkyrie owned and occupied by a squad member. If the vehicle is in the enemy territory, or allied territory that’s being captured by the enemy, then you also have to be within 1000m of the vehicle.

You can spawn at an allied base from any distance, if majority of your squad are in that base’s region, and the base itself is connected to a Warpgate via lattice.

For the purposes of the “majority”, squad leader counts as two people.

Using this implant will allow your squadmembers to spawn directly into any vehicle piloted by you. 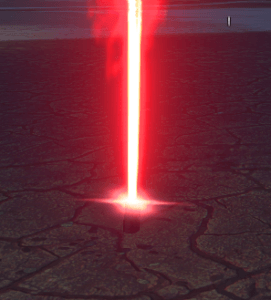 Spawn Beacon (Squad Beacon, “bacon”) can be deployed in any location with clear sky above. Spawn Beacon automatically becomes available to squads with at least two squad members. Spawning players are deployed via drop pod.

Spawn Beacon becomes available to players at BR10 (not 100% sure on this one).

Spawn Beacons are often placed by Light Assaults at tallest points of bases, such as antennas.

One thought on “Spawning Rules”