NSX Fujin is a throwing knife. It goes into grenade slot, and thrown using the “throw grenade” key. A headshot with this thing instantly and silently kills most infantry targets within 20m. Fujin can be used by all classes. By default, you carry 2 Fujins at the same time, and Grenade Bandoleer suit slot will provide 2 additional Fujins per rank.

The only way to unlock NSX Fujin is to complete the Gold level of Nanite Exports directives, which requires you to get 160 kills with four NSX weapons.

Is NSX Fujin worth it?

The only practical use for Fujin is silent assassination of stationary enemies within 20m, which makes it a fairly situational item. Depending on your class and playstyle, the amount of such enemies you encounter will range from “some” to “none”.

And enemies like that are usually unskilled, low-priority targets. You don’t help your faction that much by aggressively hunting for them. And often they can be taken out almost risk-free with melee, which would be just as silent.

Moving unaware enemies are much harder to headshot with a Fujin. However, throwing is silent and stealthy, so usually you can throw them without much risk – enemies don’t notice when you miss completely.

Carrying only a single Frag Grenade is usually a waste of the slot, so Fujin can be useful as a replacement-filler. However, most classes get access to more impactful or versatile grenades.

Technically, Fujin can instakill any standard infantry within 20m. One could argue that provides an amazing outplay potential. However, Fujin is incredibly bad in straight-up fight:

Throwing becomes a viable combat option only if both your weapons need reloading, and even then it’s more of a “last resort”.

You can try playing on Internet Delay by throwing while stepping in and out of cover, similar to how you would use a pump action shotgun, but strict requirements to aiming and timing make it challenging at best.

However, just because something isn’t practical doesn’t mean it’s not worth using, right? NSX Fujin is perfect for the the world of PlanetSide 2, filled with besaltered, bored veterans. It introduces a new, sparkly fresh and unusual way of killing. All the trouble one has to go through to even get the NSX Fujin only makes it more exclusive and adds to the “special snowflake” factor.

You can also feel like a genuine ninja or badass specops operator. All those knife throw scenes in action movies? Fujin hits the spot. If you love that entourage, enjoy being stealthy or got nothing better to do – Fujin is right for you. Otherwise – don’t bother.

Cost: 25 Nanites per one throwing knife.

Fujin has the same damage resist type as bullets, so it is reduced by Nanoweave and deals damage to vehicles that take damage from small arms. Ignore the official description “Fujin […] slices through infantry defenses”.

This means that Fujin is lethal on a headshot against standard infantry targets within 20m, and within 26m against non-NAC Infiltrators. Enemies with Auxiliary Shield can survive a headshot.

Minimap and Sound: Fire Minimap Detection Range is only 1m, so effectively you don’t show up on enemy minimap when you throw a Fujin. It is also very silent and has a barely noticeable tracer, like the Crossbow.

Sprint: Fujin seems to have the same ~0.3 second Sprint Recovery Delay before you can start throwing out of sprint, and ~0.35 second Sprint Override Delay until you can sprint after throwing.

Speed: Fujin starts flying roughly ~0.5 seconds after you press the “throw” key and has 70 m/s velocity.

Rate of Fire: after you throw a Fujin, there is a 1 second delay before you can start throwing another one. Effectively, it means 1.5 seconds between throws.

Accuracy and Range: Fujin is pinpoint accurate, even while jumping and falling, but it has some projectile drop. The Projectile Lifespan is equal to 3 seconds, so the maximum flight distance is 210m, but obviously hits will be hard to score.

Interaction with other weapons

You can throw a Fujin:

When you press the “throw” key, the following happens:

This means that you can fire a pistol almost right after throwing, but there will be a significant delay before you can fire an LMG. You cannot do a quick melee swing until you finish equipping a weapon.

You cannot switch weapons while throwing. If you try, you will equip the weapon you had in your hands before throwing, and only then start equipping another weapon.

But you can throw while switching, if you start switching weapons right before you hit the “throw” key.

A comprehensive example: you are reloading an LMG. Suddenly an enemy appears. You start switching to a pistol, and immediately hit the “throw” key.

Similarly, if you want to start sprinting as soon as possible after the throw, simply start holding the “sprint” key immediately after you pressed the “throw” key. If you were already holding the sprint before throwing, you will have to release the key and start holding again.

If you want to perform a quick-knife attack after throwing, you don’t need to hold it, one press is enough.

Example: you want to sneak up and silently kill an unaware enemy. When you move close enough, you hit several keys right after another: equip the sidearm, throw the Fujin and press quick melee. You can strike all 3 keys at once, and your character will automatically play out the actions: start equipping the sidearm, throw the Fujin, then perform a quick knife attack as soon as possible, leaving you with sidearm in hands in the end.

In this example, you equip the sidearm to shave off some time before the quick knife comes out. With this example, I don’t mean to imply that it’s necessarily better than doing 2 quick knife swings or wielding the knife. 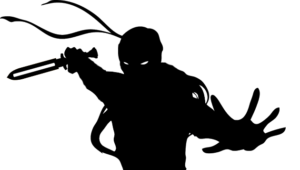 Big rule: don’t use Fujin on enemies that are already engaging you. Resist the temptation of throwing the Fujin at everything that moves, because shooting is usually a better option.

A stationary, unaware target within 20m – these are your rules of engagement if you want Fujin to be reliable.

If the enemy is moving, but isn’t aware of you – you can try instakilling him with Fujin before engaging with your primary weapon. Enemies usually don’t notice a complete miss, so if you have several Fujins, you can make several attempts relatively risk-free.

Fujin can be a great “numerical equalizer”. For example, if you stumble upon several unaware enemies, you can quickly remove some of them with Fujins before going loud with your primary weapon against the rest.

At close range, Fujin doesn’t have that much projectile drop, so aiming at the upper part of the enemy’s head usually guarantees a headshot.

With normal weapons, you aim first, and then fire. With Fujin, it is easier to press the “throw” key first, and then aim at the target during the 0.5 seconds of the throwing animation.

It’s much easier to hit the Fujin when you remain stationary yourself.

If the enemy is moving in a straight line, you can make it easier for yourself to headshot him by moving behind him, so that he moves directly away from you.

It is recommended to use crosshair overlay with Fujin, as it heavily relies on pinpoint accuracy from the hip.

When searching for NSX Fujin videos on youtube, always check the date. Videos released before Dec 22, 2016 patch are outdated.

A montage by Inshpekta Gubbins: