Heavy Assaults are bruisers of PlanetSide 2, tough as nails and with a lot of firepower. Heavy Assaults’ motto is longevity and versatility. They can outlast any other infantry class, and have an answer to any threat.

Equipment, same as life, has no price (c) Alpha Group

This video is slightly outdated, max Nanoweave Armor and Reflex Sight + Forward Grip for your starting LMG are provided for free now.

Heavy Assaults have access to a large variety of equipment, which allows them to choose from many playstyles, and adapt to any situation.

Primarily, Heavy Assaults use LMGs – Light Machine Guns. They are large automatic weapons with poor Hip Fire accuracy, heavy recoil, and low to average DPS. However, they have huge magazine sizes of 50-100 rounds, which allows them to score multiple kills before having to reload, and generally send a lot of fire down range.

Other primary weapon choices include SMGs, Battle Rifles and Shotguns. 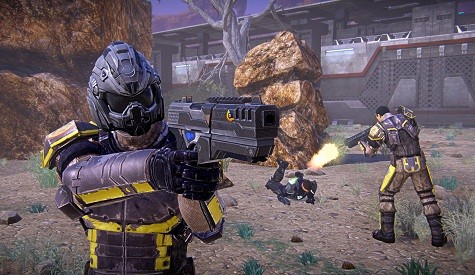 Being comfortable with a sidearm is important for Heavy Assaults, as they spend a lot of time reloading their LMGs and Rocket Launchers, as well as switching between the two. If an enemy attacks the Heavy Assault during any of that, pulling out a sidearm for self-defense is the quickest option. 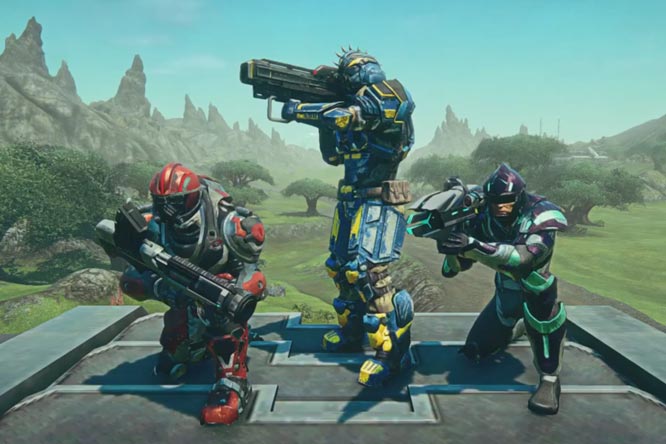 Heavy Assaults have access to a wide variety of rocket launchers and other anti-vehicle weapons. You can check out an in-depth Rocket Launcher Guide here, and calculate Rocket Launchers’ damage to different targets using the Toolbox.

Keep in mind this video is quite old and likely outdated; so don’t focus too hard on specifics.

This grenade has arguable effectiveness. It’s effective at keeping enemies in their place and facing in the same direction, but that’s surprisingly useless when trying to push through a chokepoint. Enemies are already facing your direction, it’s not THAT hard to adjust to changed mouse sensitivity and return fire somewhat effectively. Certainly with enough accuracy for a close range engagement.

So Concussion Grenades are more effective in flanking scenarios, so you can keep several enemies in once place and facing away while you mow them down one by one.

Unlike standard Frag Grenades, AV Grenades are capable of damaging all vehicles, dealing damage comparable to a rocket from a default dumbfire launcher. They also stick to vehicles and MAXes.

Trivia: one AV grenade is enough to get ESF without Composite Armor burning.

AV Grenades are popular, since normal frags are rarely useful, while AV grenades give additional utility and are a requirement for Heavy Assault directives.

Note: AV grenades will not stick to NC MAXes with active Aegis Shield ability. However, if the grenade has already stuck, activating the Aegis will not make it fall off.

Heavy Assaults have Nanoweave Armor fully certed and equipped by default. In addition to that and other Suit Slots, they have exclusive access to:

Increases the amount of Rocket Launcher ammunition a Heavy Assault can carry. One bonus rocket / magazine / battery per rank, up to 4 ranks.

Not recommended unless you specifically use Heavy Assault for solo hunting enemy vehicles. Can be helpful if you have a special loadout that you use only for deterring enemy vehicles with a lock-on launcher.

Heavy Assaults have access to Med / Resto Kits and C4.

Since HAs already have an anti-vehicle and anti-MAX tool in the form of their Rocket Launcher, most HAs prefer cheaper to run Med Kits, as they considerably increase longevity and survivability under fire.

C4 is deadly, especially when combined with a Rocket Launcher, but Heavy Assault is literally the least mobile class, and may face trouble in deploying C4 successfully.

Heavy Assaults’ ability covers then with a bright layer of faction-colored protective shields. While the overshield is active, Heavy Assault is much harder to kill, but moves 25% slower (this penalty is multiplicative).

There are different varieties of overshield ability:

NMG is often used to provide an instant advantage in a 1v1 encounter. Even when HA is caught by surprise and get shot in the back, often there is enough time for him to activate the NMG for instant 400+ HP boost and gun the enemy down.

Verdict: Nanite Mesh Generator is best suited for close quarters fights, where you don’t know where an attack will come from. It’s cheap to upgrade, but works almost as well without any upgrades. Great synergy with Nanoweave Armor.

Adrenaline Shield functions similarly to NMG, the main difference is that you can restore energy by killing enemies, and adrenaline shield drains more energy per second. There’s still some passive energy regeneration, identical to unupgraded NMG.

Activating it costs 25 energy, and then energy continues to drain at a rate of 18 per second.

This ability is very expensive to upgrade, and only a good player can take advantage of it.

Verdict: experienced players and Heavy Assault mains will eventually want to upgrade from NMG to Adrenaline Shield, but there is no hurry.

Resist Shield grants a flat 35% damage reduction while active. This damage reduction is applied to headshots, but not to fall damage, and does not stack with Nanoweave Armor or Flak Armor – the highest available resistance is used.

Energy is slowly drained over time, but taking damage has no effect on it. Upgrading the ability reduces energy drain over time.

Verdict: Resist Shield is best suited for ranged fights, where the Heavy Assault operates from cover, controls his exposure, and at any time can hide to safely recharge shields and restore health.

Due to fast recharge rate and high uptime, Resist Shield can be activated whenever the player expects danger, without negative impact on future engagements.

Despite having access to a lot of unique anti-vehicle equipment, Heavy Assault is primarily an anti-infantry class. Infantry in general is weak against vehicles, unless used in numbers and with coordination.  If your primary goal is to destroy vehicles, consider using a vehicle yourself, they are much more effective in that role.

That doesn’t mean you shouldn’t use the tools at your disposal against vehicles, just be aware that you will probably not be able to destroy enemy tanks head on, especially on your own.

Heavy Assault has both low skill floor and high skill ceiling. It’s easy to pick up and start having success, but an amazing player will perform equally amazing things.

Large magazines on LMGs. Even a newbie is likely to score a kill before running out of ammo, and it gives a skilled player the ability to get a lot of kills before needing to reload.

LMGs have high, but controllable recoil. This doesn’t mess with a newbie’s ability to get kills at close range, while a skilled player will learn to suppress recoil and fire accurately even at longer ranges.

The overshield ability gives room for error to a newbie if he gets caught out of position, and it gives a skilled player the ability to go against multiple enemies and still survive, or  to successfully engage from an unfavorable position.

Access to a Rocket Launcher means that a newbie can just run around the corner and discharge his launcher into a MAX’es face, die 0.001 seconds later, and still be useful to his team. A skilled player can calculate the trajectory and one-shot hovering ESFs with a Decimator rocket.

The overall versatility and access to variety of equipment ensure that the player is never left without a fighting chance. Newbie never feels completely helpless, and a skilled player gets a chance to shine in every aspect of the game.

Heavy Assault has a lot of potential, but it takes a skilled player to live up to that potential.

Tactical errors can be fixed by fast and precise shots. Nothing can fix errors in shooting.

Due to lack of stealth and mobility, Heavy Assault can’t be picky about his engagements. For that reason, shotguns and SMGs don’t fit HA very well, because often he can’t get in effective range of these weapons.

Overshield can give a tactical advantage, or offset a disadvantage, but all it does is ensures that HA will live a little while longer. HA still has to kill the enemy before he kills the HA.

Dodging enemy fire while hip firing is almost never a viable combat option, because overshield slows down the Heavy Assault, and LMGs have terrible hip fire.

Most LMGs have low to average DPS, so to get fast kills, HA has to go for headshots.

All this boils down to the fact that in majority of situations, the correct way to engage for a Heavy Assault is to aim down sights and go for headshots, while suppressing recoil and managing Cone of Fire.

A Light Assault can get kills and survive by picking smart engagements and correct positions.

A Heavy Assault must shoot better than the enemy. Incidentally, that’s why players with best accuracy are often Heavy Assault mains – it’s just how they have evolved.

If you’re not confident in your personal aim, and you don’t want to develop it, consider looking into other combat classes, or weapons that don’t require a lot of aiming skill. Heavy Weapons in particular.

In addition to other recommended certifications that are useful for all classes, Heavy Assaults benefit the most from:

Tool: Ground to Air Lock On Launcher – it will allow you to deter enemy aircraft, while still being usable against ground targets. 650 Certs.

Ability: Nanite Mesh Generator – upgrading it will slightly increase the energy regeneration speed. Get it to Rank 3, which will cost only 31 Certs, but don’t waste any more on it.

You can learn more about ASP here.

Allows use of Reserve Hardlight Barriers in the Utility slot. This could be potentially useful for holding points solo or with semi-coordinated squads, or for roleplaying. But no self-respecting Heavy Assault main that values combat efficiency would ever give up their Med Kits for this contextual perk. And tight coordinated groups of infantry would likely include an Engineer to provide ammo anyway, who is a better candidate for deploying barriers.

Provides access to Flash Grenades for Heavy Assault. This unlocks only the classic Flash Grenade, not the Quick-Det variant. Flash Grenades are potentially better for breaching, as they are better at neutering enemies’ ability to shoot back, and they don’t have a grenade indicator.

Allows use of Heavy Weapons in the secondary weapon slot.

Sidearms are still going to be better for situations when you need to just quickly finish off an enemy after running out of ammo for the primary weapon, or when you are caught reloading or using your Rocket Launcher.

Besides shortest Equip Time, sidearms also have fastest reloads, so they will also take less time to reload and go back to your primary weapon. That speed is what you would be losing when going for a Heavy Weapon secondary.

What you would be gaining depends on your faction:

NC05 Jackhammer is a highly competitive shotgun, which combines accuracy and versatility of semi-auto shotguns, and power and quick TTK of pump action shotguns in burst mode.

X2 Lasher is a situational tool for suppressing groups of enemies, and denying them access to certain areas or entrances.

T7 Mini-Chaingun is a hip fire-centric automatic weapon with high DPS and mobility.