Simulationcraft is a standalone program that can simulate combat scenarios for World of Warcraft and measure statistics such as damage per second. It is invaluable for finding out statistically superior rotations, and gear and talent setups.

Simulationcraft provides the ultimate answer to questions such as “which trinket is better?” or “which talent is better?”.

Simulationcraft has huge functionality, but can be hard to use properly. The purpose of this guide is explain the basics of Simulationcraft.

Why not just use a dummy? 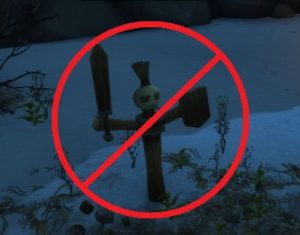 Dummy testing will never yield accurate results because it has a very small sample size, even if you hammer at it for hours. Simulationcraft runs thousands of simulations in mere seconds, and averages out the results, making sure that random is never a factor.

If you want to test different pieces of gear on a dummy, you have to actually own them. With Simulationcraft, you can run simulations for items you don’t have yet, to find out if they are even worth pursuing.

1) You import a summary of your character into Simulationcraft. It includes your equipped gear, talents, artifact traits, and all other relevant information.

2) You specify an Action Priority List  (APL)- a “rotation” of actions for you character to perform in Simulationcraft.

Both APL and the summary use Simulationcraft’s internal “programming” language.

4) You start the simulation – a simulated battle between your character and enemy targets.

During a simulation, Simulationcraft constantly goes through the Action Priority List and executes first available action.

5) You get results. Simulationcraft runs the specified number of fights, compiles the results and shows them to you, and you can analyze them and draw conclusions.

You can simulate multiple character summaries and APLs at once, and Simulationcraft will show you the comparison.

For example, you can simulate your character with several different trinkets to find out which is superior.

How to sim your character

What you will need

The only purpose of this addon is to export a character summary.

Installation: download the addon, and extract the archive into this folder:

World of Warcraft enables newly installed addons by default, so no further action should be necessary.

To make sure the addon is enabled, go to “AddOns” menu on the lower left of the character select screen, and make sure Simulationcraft’s checkbox is checked.

Depending on which version you choose to download, Simulationcraft may require an installation or just to extract the archive.

Start Simulationcraft as you would launch any other program.

You will notice Simulationcraft has several tabs at the top. Select the “Simulate” tab. 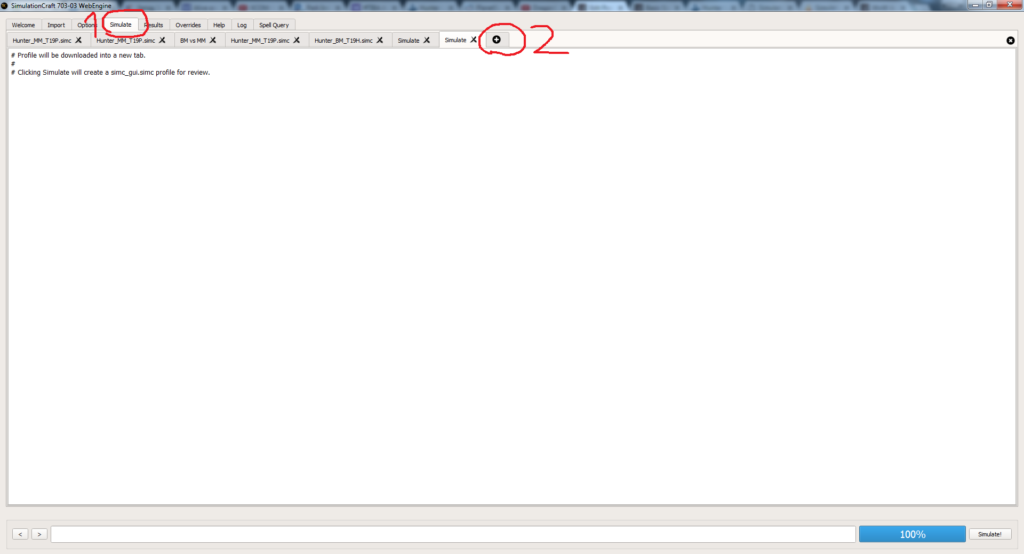 It will be called “Simulate!” by default, but you can right click and rename it.

Start World of Warcraft and log into the character you wish to simulate.

Type this into in-game chat: /simc

A popup window will open, containing the summary of your character: 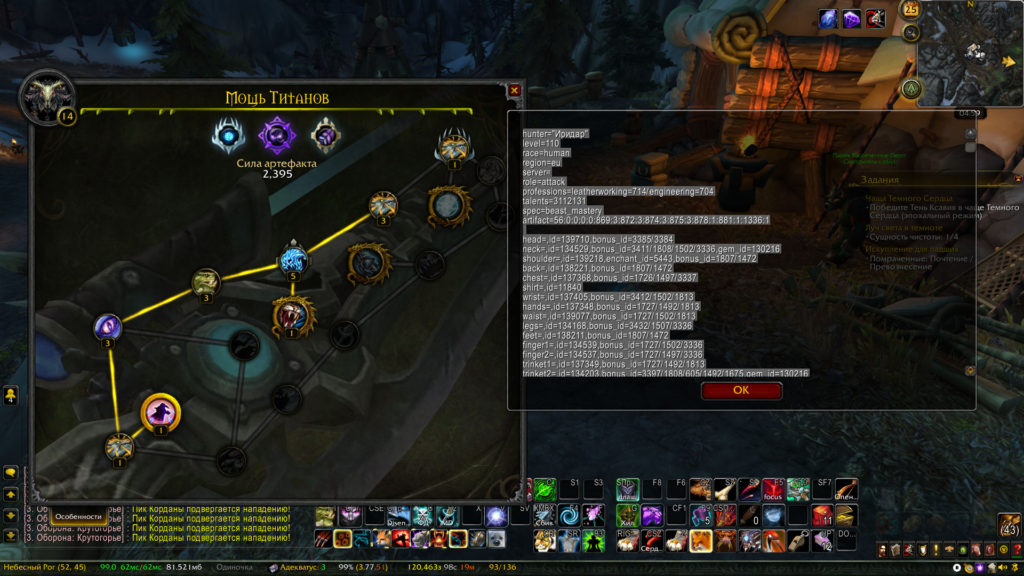 Press Ctrl + C to copy the summary, then Alt + TAB to switch back to Simulationcraft window. Or you can just exit the World of Warcraft.

Use Ctrl + V to paste the summary into Simulationcraft: 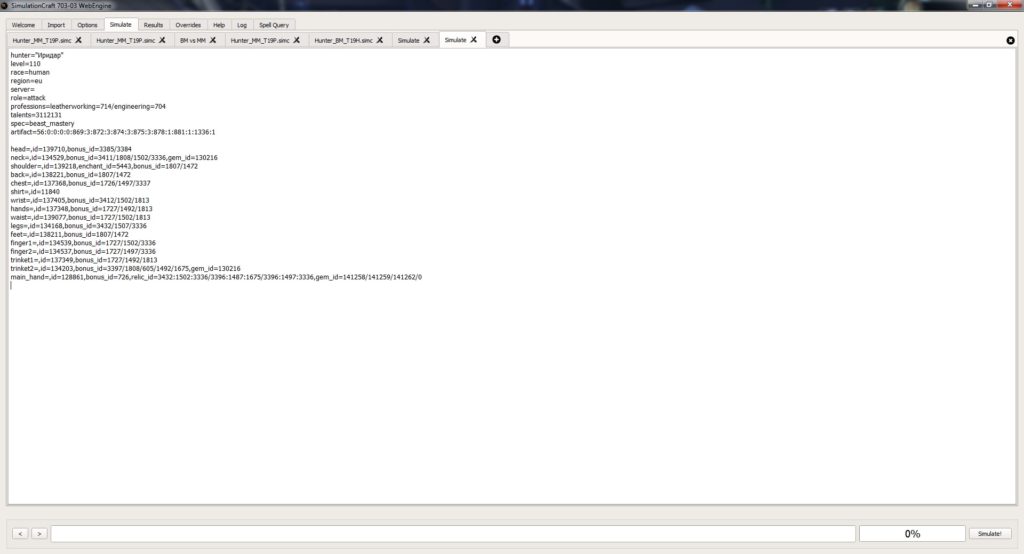 Ideally, you want to write your own APLs, that will reflect your playstyle, so you can get the most accurate and personalized results.

But writing an APL can be a daunting task, and for now it’s fine to use a sample APL from one of the Simulationcraft’s sample profiles.

Go to Import tab, and then to Sample Profiles subtab. Select your class and spec, and double click on a sample profile that is closest to your gear level. 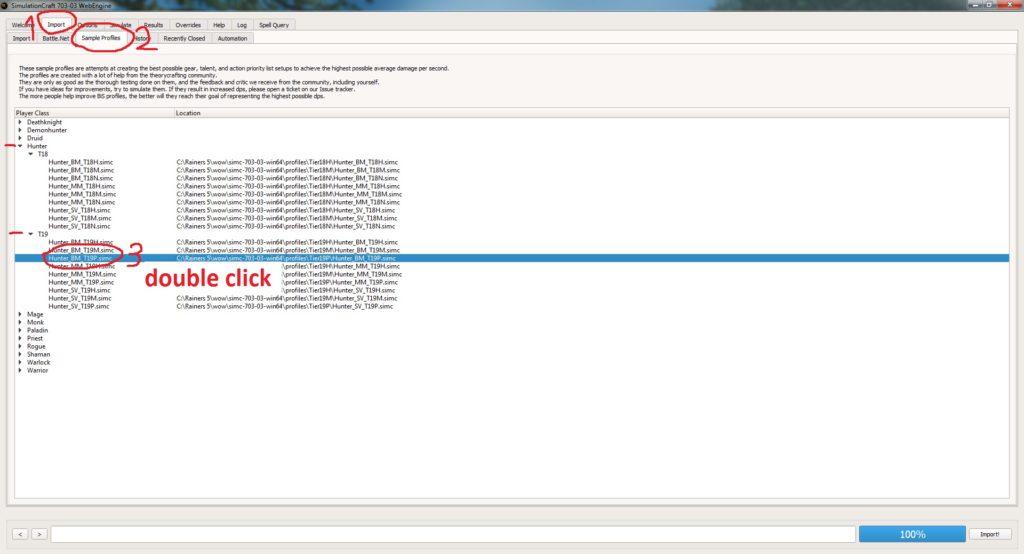 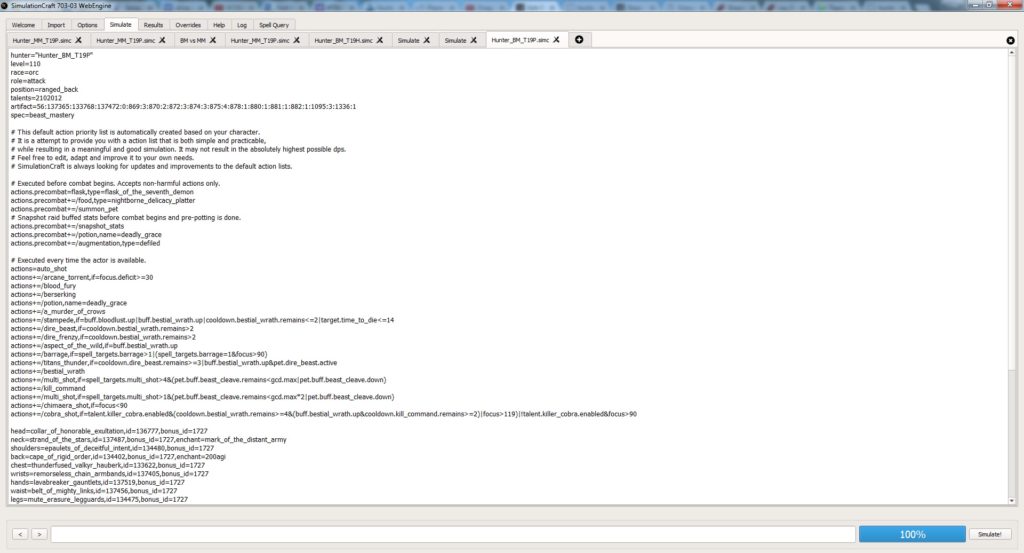 Select and copy everything from this line:

# This default action priority list is automatically created based on your character.

And up to the start of the gear section:

Then copy that Action Priority List into your own Simulation tab: 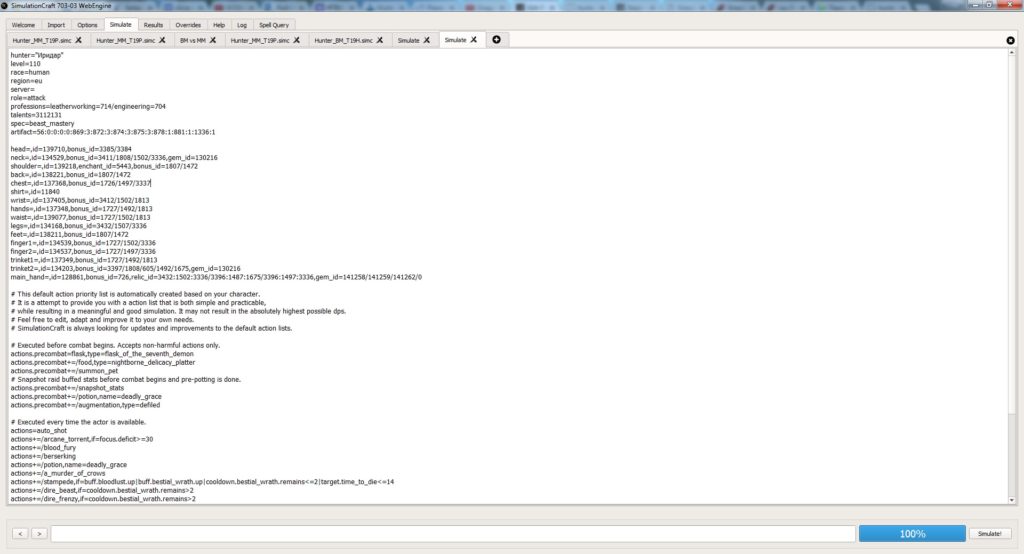 Make sure to add this after the Action Priority List, if you’re a Hunter:

In total, your simulationcraft profile should look like this.

You are all set! Click “Simulate!” in the lower right corner to start simulation.

A window with results will shortly open: 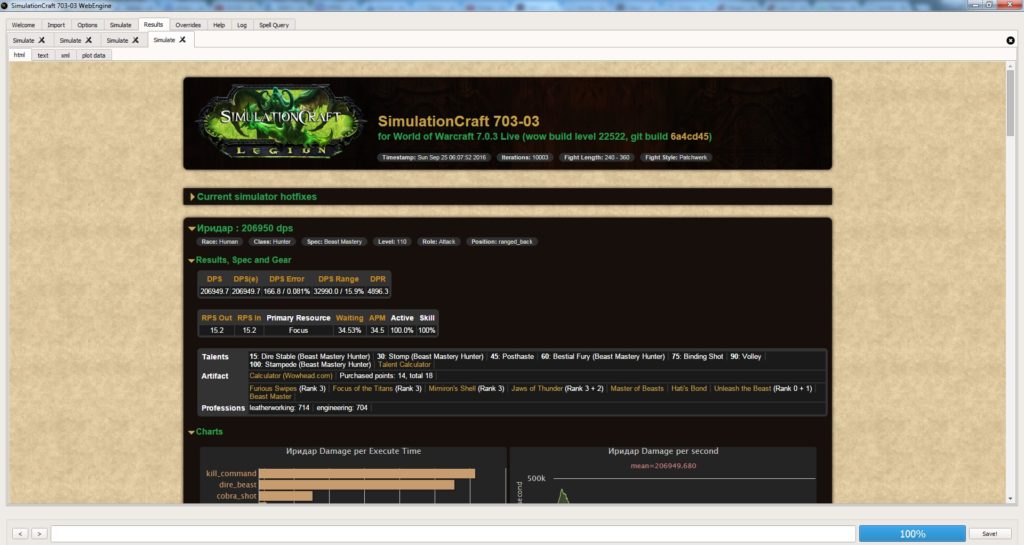 The “DPS” statistics is the most important one, but you can learn other useful things as well.

Your character summary contains your chosen talents in numerical form, for example: 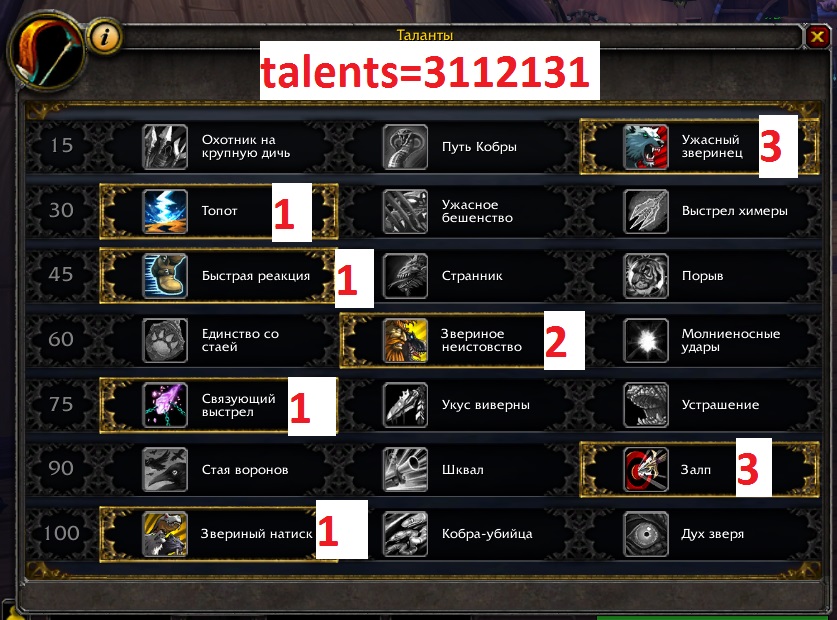 The gear section of your character summary consists of multiple lines, similar to this:

Simulationcraft uses identification numbers to describe pieces of gear. “id” refers to base id of the equipped item, while “bonus_id” refers to various modifiers such as gems or different item level version of the item, such as warforged of upgraded.

You can replace this code with ID numbers of another item, if you wanted to simulate your character with it.

The easiest way to find out ID numbers for an item is to equip it and use /simc command again, and just copy the single line describing that item.

If you don’t own the item, go to Wowhead and use it to find that item.

Let’s say I wanted to find out if it’s worth replacing my Breastplate of Ten Lashes with 845 itemlevel version of the Ley Dragoon’s Hauberk. 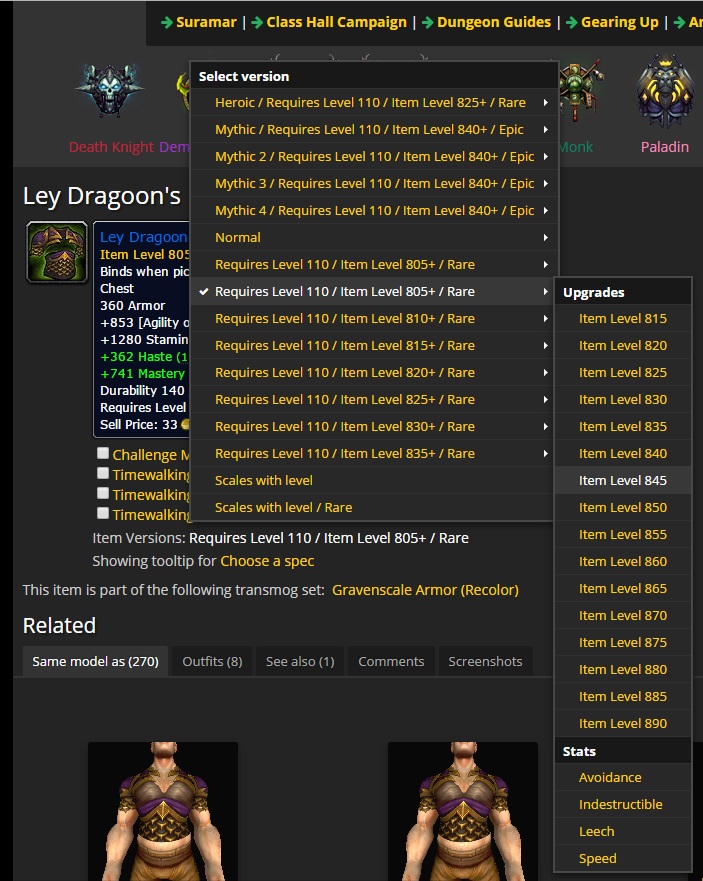 Then look at your browser’s address bar:

So to put the Ley Dragoon’s Hauberk on your character in simcraft, you have to replace the chest code with this:

Check the “Enable Scaling” checkbox, and checkboxes for all stats that you would like to get scaling for (stats that are useful to your character): 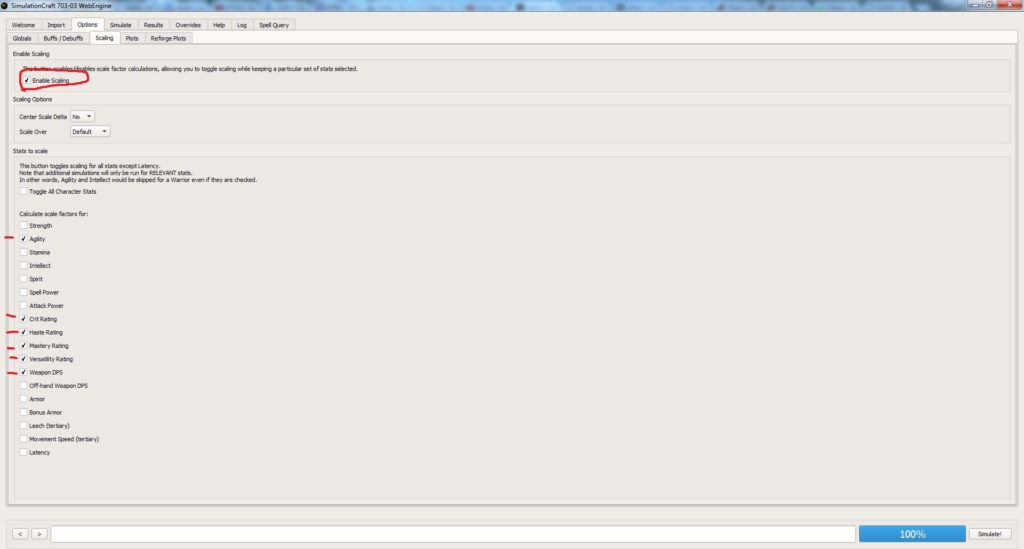 When you simulate a profile, Simulationcraft will show your Stat Weights on the results page: 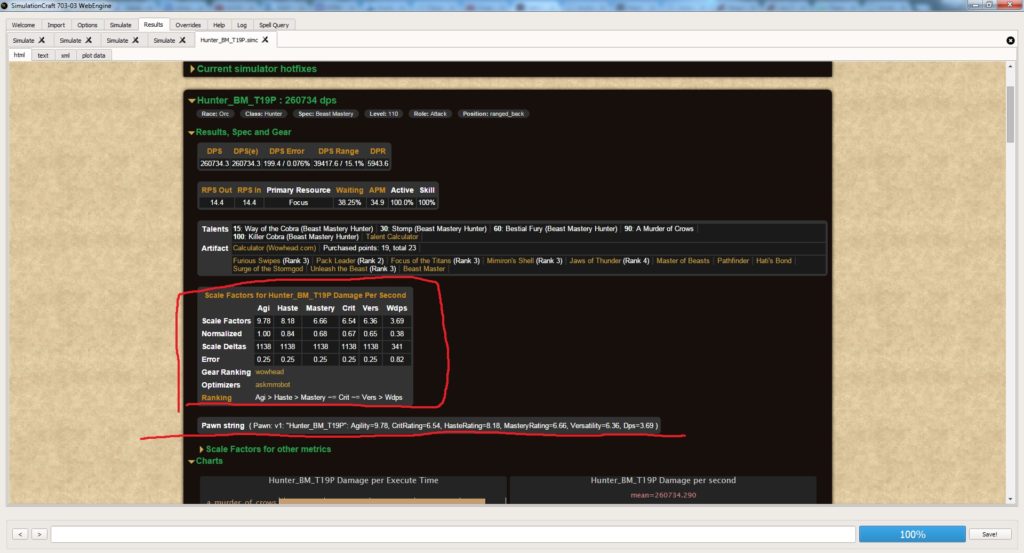 You are even presented with a Pawn string that you can import into Pawn addon in game and use it to judge whether an item will be an upgrade for you, based on YOUR stat weights for YOUR character and YOUR rotation, if you actually bother to create a custom APL.

It is important to understand and modify Action Priority Lists so you can find out the best rotation for your character. For example, you could find out that using ability A on a higher priority than ability B can increase your DPS.

Precombat section makes your character perform certain actions before the simulated combat begins, such as eat food, drink a flask or precast an ability, such as Pyroblast.

Precombat section can have only one damaging action, after which the combat will begin.

After the simulated combat begins, your character will constantly go through the Action Priority List, executing the first available action.

(note that this APL doesn’t reflect optimal rotation for the MM hunter, it’s just an example)

Your character will activate Auto Shot.

Use Trueshot every time it’s available.

Use Barrage when it’s available and you have enough Focus for it. With this priority list, simulationcraft will not perform any special measures to pool focus or otherwise prepare for Barrage.

Use Marked Shot when it is available – when the target has Hunter’s Mark debuff. Casting Marked Shot will put Vulnerability debuff on the enemy.

Cast Windburst if the enemy doesn’t have Vulnerability debuff or it will last less than a global cooldown, meaning that you can’t take advantage of it even if you have Lock’n’Load proc that makes Aimed Shots instant.

Casting Windburst will also debuff the enemy with Vulnerability.

Finally, if there is no other action available, your character will cast Arcane Shot to replenish focus and make use of “Marking Targets” buff to activate Marked Shot.

Simulating multiple profiles at once

You can insert multiple profiles one after the other, and simcraft will simulate them at once:

For example, this combination of sample profiles will sim all three hunter specs at once: 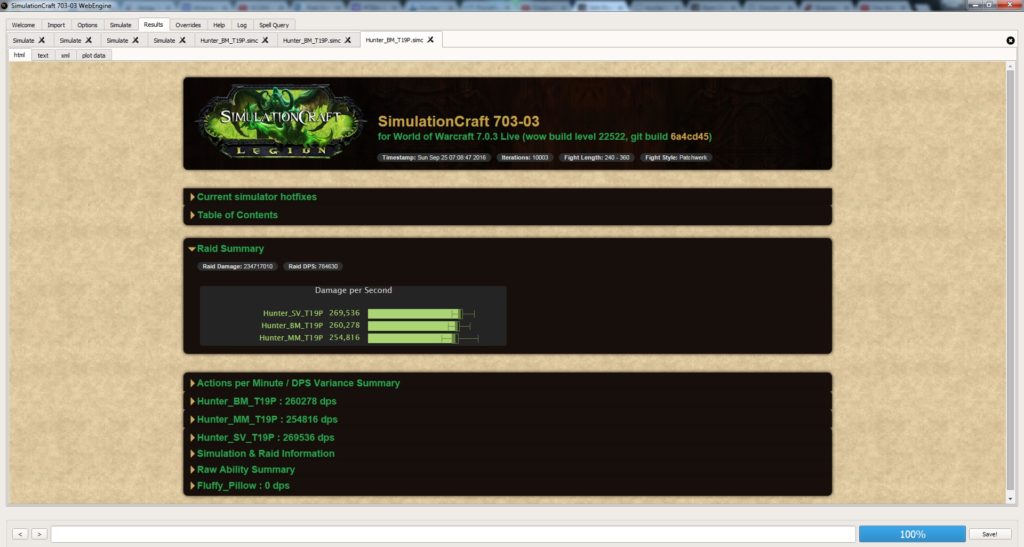 You don’t have to copy whole profiles all the time.

If you want to perform a simple comparison, like would your DPS increase if you were to replace your chest piece with another one, you can just tell simcraft to copy your profile, but replace the chest piece.

Insert this after the profile:

And the result will be: 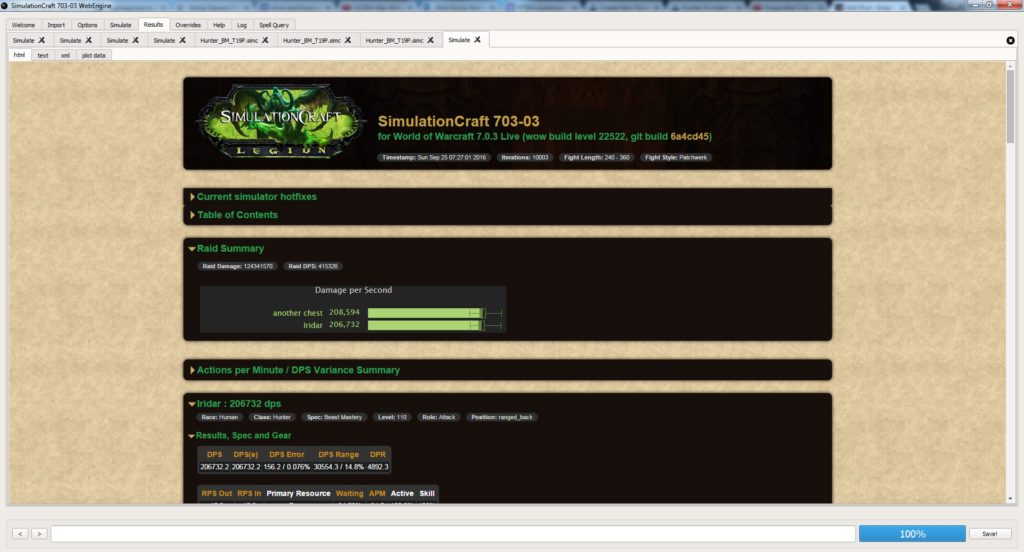 This can be used to sim your character with different trinkets or talents as well.

By default, Simulationcraft will not use any trinket abilities, you have to manually add them into Action Priority List.

If you your character has this trinket equipped, add the following into Action Priority List:

You can add “if” conditions to this action just as you would for an ability. For example:

This will make simcraft use the trinket only when Barrage is ready to cast and you have resources for it.

World of Warcraft is a great MMORPG, but it’s dated and it shows. The new character animations that came in Legion are great, but I’ve always been more of a sound kinda guy, so I find that adding a frivolous amount of custom sound effects to events and abilities can really spice up the dusty game.

HOW TO ADD YOUR OWN SOUNDS

There are several ways to attach custom sounds to events and abilities. The easiest way is to use the TellMeWhen addon:

This addon has a huge amount of features, and can be overwhelming to try and figure out, but it’s definitely worth the effort, because you can track almost anything with it.

Basic idea is to create a new icon, that will show on “succesfful cast” combat event, and play a custom sound when that happens. You don’t actually need the icon to show up, so check “always hidden” checkbox.

WeakAuras is a popular alternative that can do this as well.

These are stored in WoW files, so you don’t need to download them, just use these sound paths in TellMeWhen.

You can configure TellMeWhen yourself or just import this group:

!!! Put sound files into this folder:

How to import TellMeWhen groups

To import a group into TellMeWhen, you have to paste its code into a tiny black text field in the bottom right of the TMW configuration window.

Next to the text field there is an “Import / Export / Restore” button. Press it after you paste the code and follow the menus.

It should look something like this: Import -> From String -> Group X -> Copy whole group -> Create new profile group.

There could be a popup window warning you about importing LUA code. Accept it.

Perfect for Thas’dora in bow form. Also check out Barrage Alt 2 and Marked Shot Alt further below to complete the archery sound profile.

You can configure TellMeWhen yourself or just import this group:

!!! Put sound files into this folder:

This is just an example of what I’m using. I encourage all of you to seek your own custom sounds that would make your gameplay more epic and unique.

Made with “blaster” *pew-pew* sounds in MoreSoundFilesPack above.